“Are there lentils in this?”

As the daughter of a gastroenterologist, I had a healthy appreciation for fibre thrust upon me at an early age. I’ve also loved cooking for as long as I can remember – my mom likes to tell the story of a time I was three, and asked when I could cook for myself. “When you can read a recipe by yourself,” she told me, “then you can cook by yourself.” So I went off with a stack of cookbooks and learned to read.

Years later, when my dad was seeking healthier, higher fibre alternatives to the usual high fat, high sugar cookies and brownies he loved, I began experimenting with lentils and pulse purees as an easy, alternative way to boost fibre and protein in baked goods. Over the years, after opening a catering business and then a cookie bakery, and then publishing my first cookbook in 2000, I got to know lentils even better, and their place in the Canadian culinary landscape. I was fascinated to learn that the bulk of the world’s lentil exports came from Saskatchewan, and how easily they could be added to various dishes, from chili to my morning oatmeal. As a kid, my dad would add oat bran to everything in an attempt to boost our fibre intake – as an adult, lentils were my oat bran, proving that we do indeed become our parents.

In 2010, as I watched the Vancouver Winter Olympics with my best friend Sue, we discussed lentils and their presence in cuisines around the world, and how crazy it was that in Canada, with all our culinary knowledge and kitchen conveniences, most home cooks were still mystified by dry lentils. Lentils are convenient, versatile, easy to cook, environmentally friendly, and blow out of the water the myth that healthy food is expensive. We decided to write a cookbook devoted to pulses, and it won a Taste Canada award for best single-subject cookbook in 2012.

My love of lentils became so widely known that anytime I showed up somewhere with food – even a cake or pie – people would look suspiciously at it and ask, “are there lentils in here?” (Even when there were, people rarely knew.) These days, with 8 cookbooks, a food blog and weekly food segment on CBC radio, lentils still take up prime real estate in my kitchen – I always have jars of dry lentils in my cupboard, and canned in my pantry. I simmer pebbly blue-green lentils to keep in the fridge to add to grainy salads, sauté alongside chicken, lamb and fish, add to soups or smash into burgers. The large, meaty green-brown ones go into curries or sausage soups, or get whizzed into hummus. But I go through split red lentils faster than any – they cook so quickly, I shake spoonfuls into old-fashioned oats as they simmer, add handfuls to pureed soups and use them to thicken stews, and simmer them plain to cool and add to muffins, loaves, crumbles and crisps, cookies and scones – they mimic oats, and no one knows they’re there.

Lentils have become such a staple in our kitchen when people ask, “are there lentils in this?”, it’s likely there are.

Julie Van Rosendaal is the food and nutrition columnist on the Calgary Eyeopener on CBC Radio One, the author (or co-author) of six cookbooks, including Spilling the Beans and Alice Eats: a Wonderland Cookbook. She is the food editor of Parents Canada magazine and a freelance writer, contributing to local, national and international publications.

A regular on local and national morning shows and with 3 seasons of It’s Just Food (co-hosted by Ned Bell) in reruns, Julie is regularly seen on TV. Many know her from her popular food blog, DinnerwithJulie.com, which documents real life in her home kitchen in Calgary, Alberta, Canada with her husband, Mike, and 8 year old son, Willem. 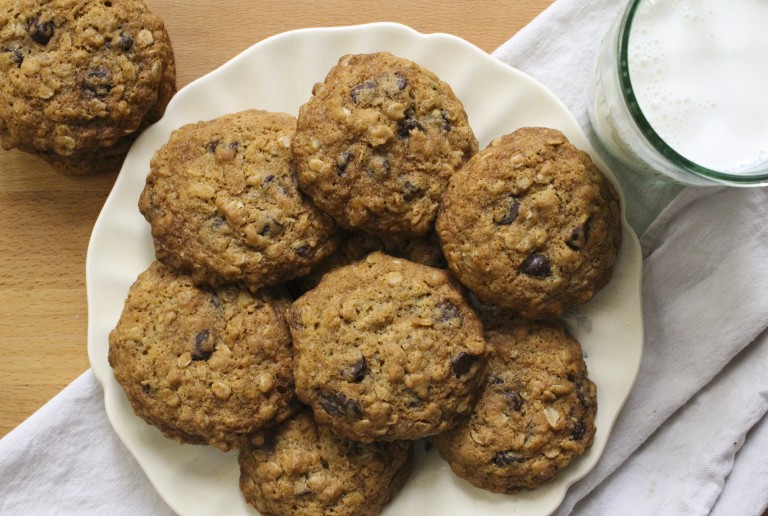 In these crisp-edged, cakey cookies, lentils cleverly disguise themselves as oats - no one will ever guess they’re in there, bumping up protein and fibre. With only 1/2 cup of brown sugar, they're considerably lower in sugar than most cookies, and yet perfectly sweet. Add chocolate chips or chopped dark chocolate, or stir in dried fruit or chopped walnuts or pecans - whatever you like in an oatmeal cookie.