Lentil Soup in a Greek Home

My memories of lentils go back to my earliest memories of smell, to the time when I first became aware of soups, roasts, pies and other things first by their scent wafting through our home and then by what they actually were.

My dad, a chef and a Greek immigrant, put lentil soup on the family meal plan once a week, consistently on Wednesdays, the legume day in most traditional Greek homes. Fish on Fridays, beans on Wednesdays, was a sort of unspoken mantra. That I and my sisters wanted nothing to do with that simmering pot is besides the point. Our young American palates wanted all the things my parents thought would forever disengage us from being Greek: pop tarts, twinkies, cheese wiz and all the other “foods” that were part of the Space Age. Lentils were forced upon us, and we had to finish every last pulse in the bowl.

We become our parents. Isn’t that what they say? At some point in young adulthood, on my own for the first time, I developed an overnight love of lentils. I knew my dad’s recipe by heart, a traditional one, consisting of onions and garlic sweated in Greek olive oil, lentils tossed in, bay leaves, tomatoes, and water. An ending of red wine vinegar and raw red onions was atop every bowl served in our home, as my immigrant dad extolled the virtues of the dish based on empiric wisdom and no hard knowledge whatsoever of the nutritional value of each serving. As a young adult, I could intuit the good feeling I had every time I did, indeed, consume a warm bowl of lentil soup and I’ve imparted that love and wisdom to my own kids. Following the family tradition, we also have lentils once a week and my own kids, Greek born and raised, have loved them since toddlerhood.

Lentils are one of the oldest pulses in the Mediterranean and have been part of the Greek diet for eons. Despite their longevity in the kitchen, traditional recipes are relatively simple, straightforward and the same from place to place. Lentil soup is everywhere in Greece almost the same, tinged here and there with a different herb. On the “Blue Zone” island of Ikaria, where my family happens to be from, the traditional lentil soup is seasoned with either oregano or sage. It’s delicious.

There are some wonderful lentil-grain combinations in the southern Aegean islands, too. One of my favorite dishes is a lentil and Greek couscousi (a tiny, round, pellet-shaped pasta) combination that is the ultimate comfort food. Lentils and rice are another popular duet in rural Greece. In fact, fakorizo, as lentil-rice is known in Greek, was the de facto recipe for reinventing leftover lentil soup. Mix in a little rice and you’ve got a new dish. There is a lot of inherent wisdom in the Greek kitchen.

In the north, I’ve come across very old recipes for savory phyllo pies filled with lentils. Modern cooks combine lentils with the vast array of fresh seafood and fish. A favorite combination is grilled or braised Greek octopus over lentils.

But for me, nostalgia rings strong and I yearn most for the flavors of those lentils from my childhood. My dad’s Ikaria-inspired lentil soup, seasoned with delicious Greek oregano. It brings me back to the best of times. That my own children also love it is proof enough that the Greek lentil soup can travel well across borders and generations.

Diane Kochilas is an IACP-award-winning author whose latest book is Ikaria: Food, Life & Longevity on the Greek Island Where People Forget to Die. She is a TV show host and peripatetic chef. Together with her husband, Vassilis, Diane owns and operates the Glorious Greek Kitchen Cooking School on Ikaria. You can find her at www.dianekochilas.com. 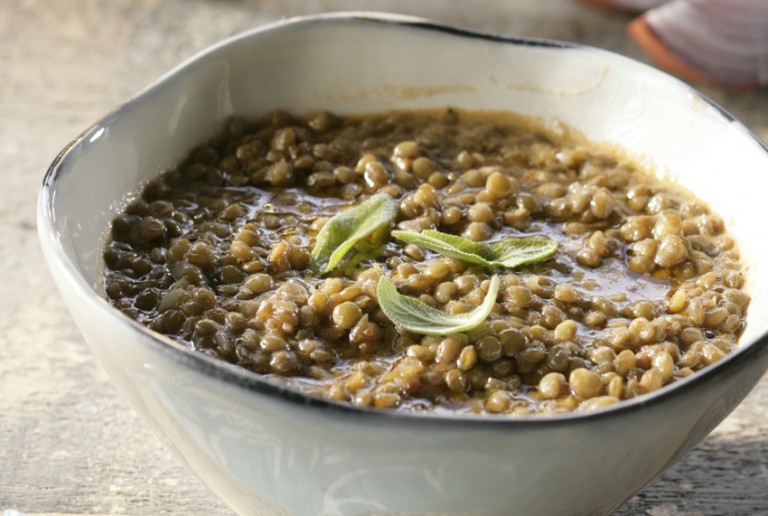